Need some tips on how to decorate a small downstairs toilet?  This before-and-after makeover of a tiny cloakroom is sure to give you some design and decor ideas.

When we bought this house I was actually really pleased that it had a downstairs toilet or cloakroom (call it what you will).

Our previous house did not have this luxury so this was one of the things on my wish list.  I love the fact that guests don’t have to trail upstairs anymore to use the WC.

The décor in the toilet, as with the rest of the house, was brown!

I’m sure in its time it was considered lovely but it certainly was not to my taste – yuck!

The toilet is also partly under the stairs and it had the underneath of the steps showing in an alcove behind the toilet.

Our handyman said it was best to box this area off and to re-tile it.

I was not so sure about boxing this off as it would further reduce the space that we had and make it even smaller so I had my doubts.

But we did listen and let him do it how he thought was best.  And in the end, we had no regrets – he was absolutely right.

And in fact, I love how it turned out in the end.

I really like the little alcove feature that he made behind the toilet and I love to change the decor around through the seasons.

For the walls, we chose plain white tiles with a black mosaic trim.

And for the floor, we used some large grey floor tiles that we had left over from the bathroom.

We chose a wall-mounted toilet with a built-in cistern.

And we also found a modern wall-mounted sink and cupboard that fit beautifully.

It really helps that it is wall-mounted and is raised off the floor – this gives a little bit more space than if it had been floor-standing.

Whilst it is not the largest downstairs toilet / WC in the world we were still able to update it with a nice clean and modern design.

I chose a few simple home decor accents to decorate in the alcove.

Whilst I am not a proper artist I do like to dabble so during a little play-around session I hand-painted the flowers and bird picture using watercolours.  I then framed it in a white Ikea Ribba shadow box frame.

And the cream and blue flowers are cute little scented soaps that I found at a local craft fair.

There is only so much you can do with such a tiny space but I was pretty pleased with the end results. 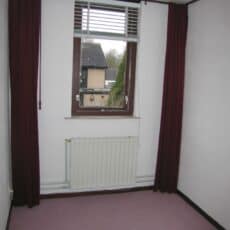 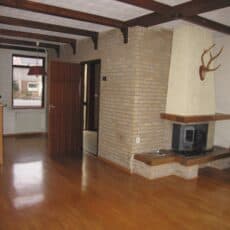 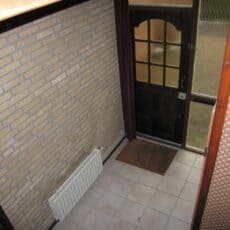