Now I have been wanting to re-do this since last Christmas when I had my first attempt at cushion making. I have the tendency to ‘wing it’ a bit and jump in feet first without properly consulting tutorials or really knowing what I am doing – sometimes this works great but other times I end up with something I’m not completely happy with.

Last year I just plopped a cushion on top of the material and roughly cut out the front and two back pieces, I then went on to just sewing it up without pinning or tacking.  Whilst the result was a little amateurish (the seams were a bit wonky and the back gaped a little), once I had stencilled it with a deer head it did actually look pretty effective. 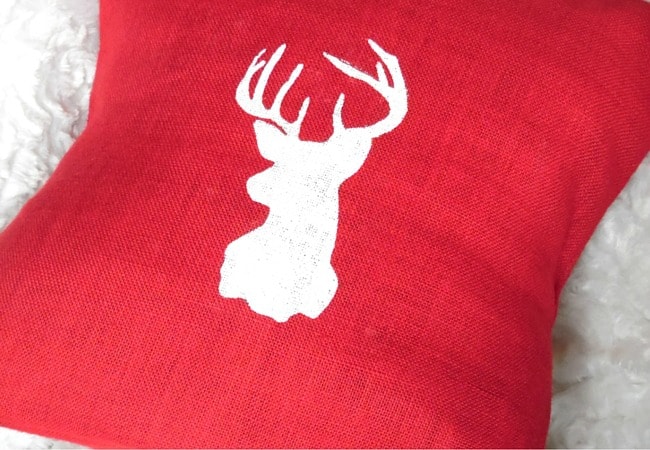 But…..as I looked at it over the Christmas period I thought to myself yes not bad but I can do much better than this and I decided to have another go at it.  This time taking a little more care and including white pom-poms to it to jazz it up a bit.

It turned out great!

(my daughter even went as far to say that it looked shop bought!) 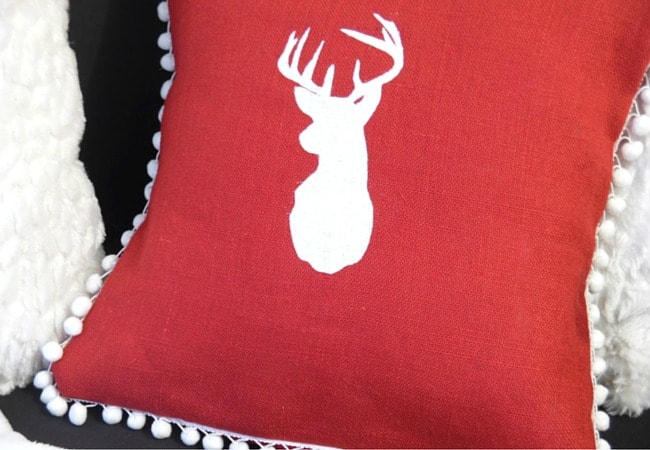 Cut your 3 pieces of material as neatly as possible to the sizes shown above. 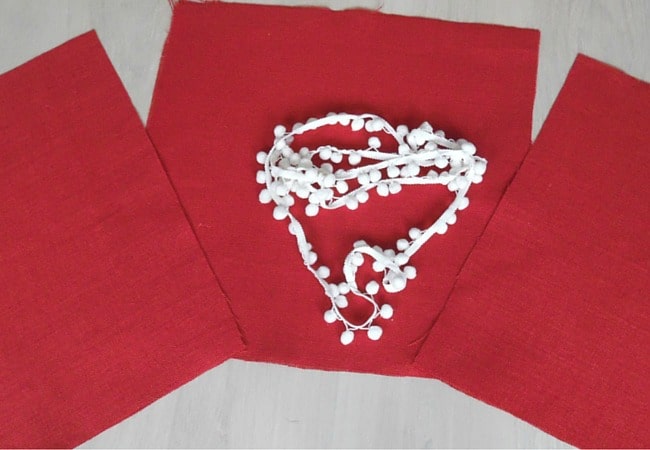 If required press your material pieces with a hot iron (mine were pretty creased from being stored).

On the front of the largest square, allow 1 cm distance from the edge and draw straight lines (with tailors’ chalk) all the way around – giving you a 43 cm box (this bit is optional but I did it to ensure that the trim runs straight).

around the outside of the square leaving  1 cm gap from the edge.

Make sure the pom-poms are facing inwards (see pic).

Now sew the pom-pom trim all the way around removing the pins as you go. 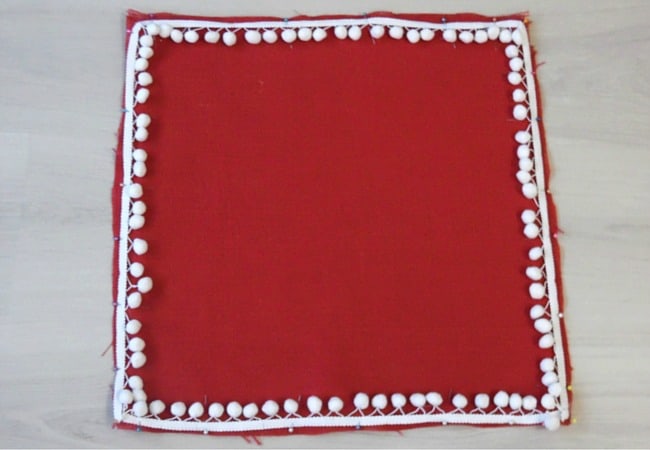 6. Fold Over Raw Edge
Take the 2 smaller rectangles, on both pieces fold over 1 cm on one of the long sides and press flat. 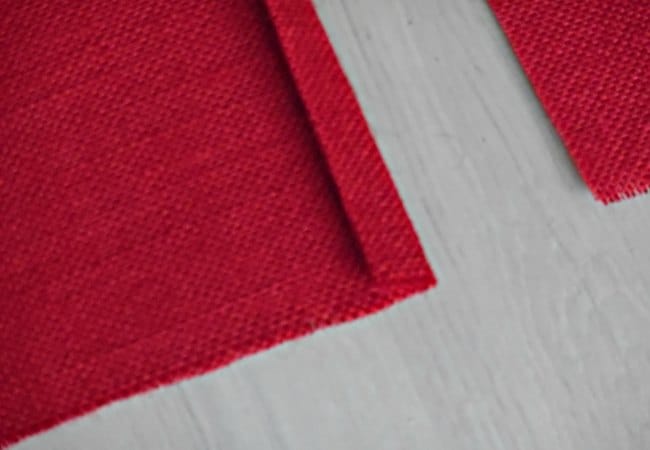 Then fold the material on the 2 smaller pieces over again on the same side (another 1 cm) and press flat (the raw edges will now be hidden).  Now sew down to secure.

8. Pin Pieces Together
Lay the large square front piece right side up on the table and ensure the pom-poms are all facing inwards towards the middle.
Then place the smaller back pieces on top, right side down, over lapping in the middle.  Now pin this all the way around the edges. 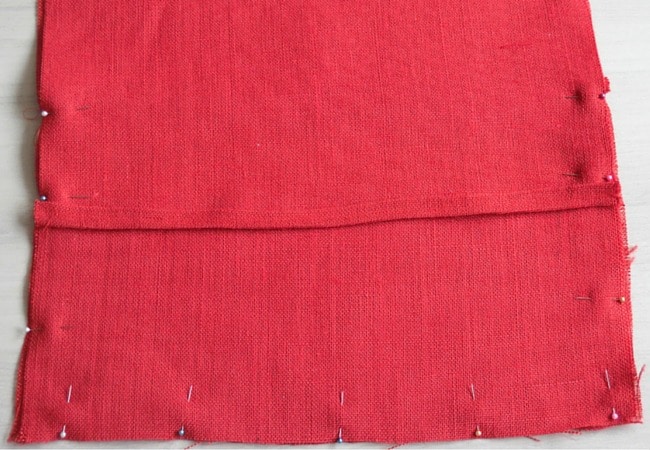 9. Sew Together
Next sew all the way around leaving a 1 cm  seam allowance (make sure the pom-poms don’t pop the wrong way as you are sewing).
10. Turn Right Way

You can now turn the cover the right side out, you can use something pointed but not sharp (like a chopstick) to push the corners out. 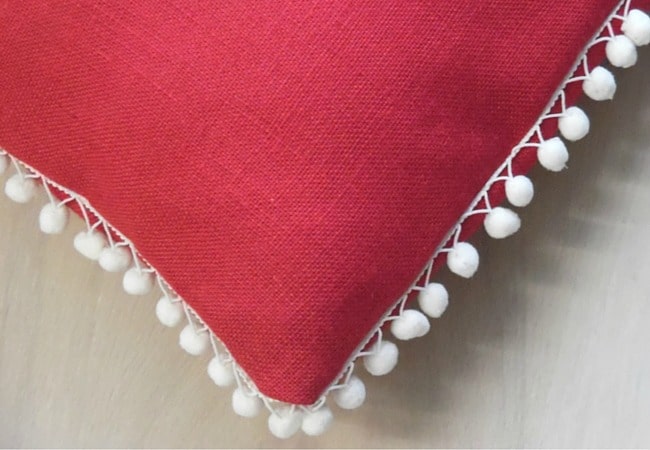 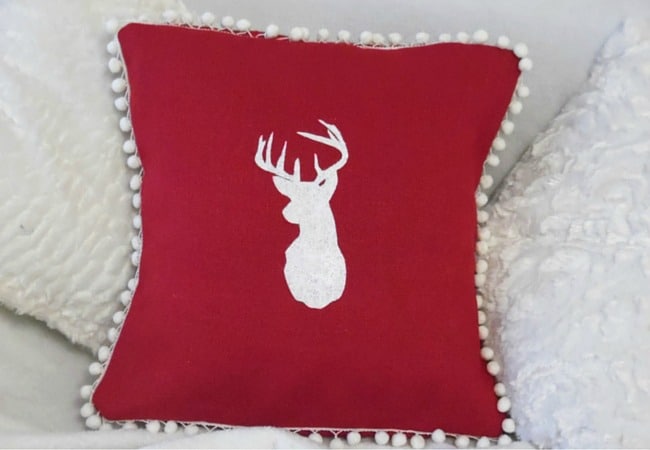 Now you should have a pretty good looking pom-pom cushion!

If you would like to take it a step further and stencil the cushion you can follow the next set of instructions.

How to stencil on Burlap / Jute

Sign up to get all my latest tutorials straight to your inbox! 🙂 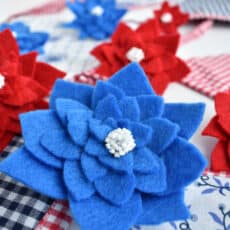 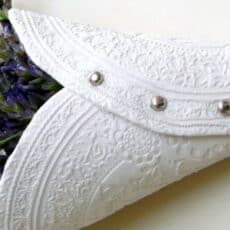 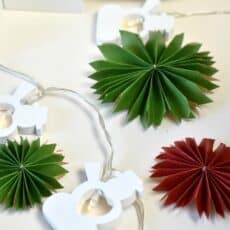